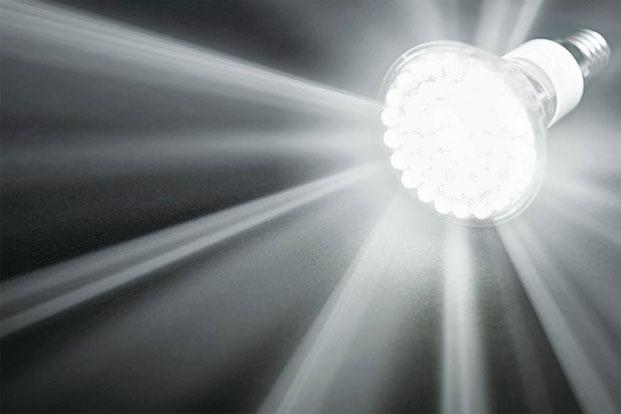 Many of us look for specifications to compare product to product. Lumens (a measurement of brightness) is one of them but unlike a typical light bulb which scatters light uniform in all directions (omni-directional), LED does not (uni-directional). So lets look at the things that effects brightness.

The two photos on the left helps illustrate the common problems with LED light distribution. Most will assume that the basic LED light bulb on the furthest left will have the same uniform brightness as a compact florescent or incandescent bulb but its far from that. Basic LED bulbs are not suitable for wall lights or even certain hanging lights as the uneven light distribution as it will look unattractive.

So how does one calculate lumens in a case of a basic LED bulb design comparing with the eLED general lighting series design?

In conclusion, there are 2 things that effect brightness: –

1. The light angle / distribution. Some companies narrow the light angle to give an added boost in brightness but that’s just misleading to customers.

2. Frosted or non frosted. Frosted covers will give a nice glow but will have less light travel compared to direct.

Measuring light depends on the equipment used and its sensitivity. Currently there is no governing body that helps standardizes the brightness rating for any light bulbs. Light color is also very important in determining brightness.  This issue doesn’t only effects LEDs but also florescent. For an example, certain brands 18W compact florescent lamps gives off different brightness even though its rated at 18 watts?

In conclusion there are 2 issues effecting lumens measurements: –

1. The type of equipment used and its sensitivity.

2. Lack of regulation and control to ensure a reliable brightness rating for consumers.

For eLED’s testing, we use the same light meter to do all our brightness tests as well as measure at the same distance. Firstly, we measure the 18W CFL brightness then we repeat the same process with other products. Photos are then taken that showcases that the tests are done correctly. These tests can be repeated at our head office if you require further proof.

The above illustration showcases how a light bulb’s brightness changes by the environment that it is in. Most LED bulbs are used in a down light casing. In such cases, due to the short bulb size, the light angle is greatly reduced comparing with eLED’s vertical lighting bulb on the right. So even though a basic LED bulb such as 10W can be brighter, its application in a down light casing will cut down its effective lighting by 30% due to the reduced coverage angle.

To summarize all 3 points, LEDs can be misleading in terms of its specs. What we are used to determine brightness for incandescent and florescent doesn’t apply for LEDs hence the major confusion. It is through this knowledge that we @ eLED hope to share to allow everyone to select the right product. We @ eLED is not just a responsible green company but also a caring one. This is the main reason why our consultants will always find out what clients intend to use the bulbs in before recommending.  In addition to that we allow our clients a 14 days grace period to try and later either change light colors or even upgrade to a brighter bulb.

This is our way of taking good care of our clients, so come and try one today.

We are LED Lighting Specialist. eLED products are designed by Malaysian professionals that bring together their experience in creating LED products that are not only of top quality but also efficient, effective, hassle free installation and maintenance.